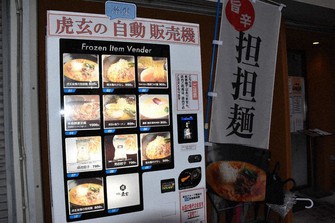 The Dohiemon vending machine for frozen food items is seen in front of Yamanote Toragen in Toyota, Aichi Prefecture, on May 7, 2021. (Mainichi/Shiho Sakai)

NAGOYA — What are you in the mood for? Chinese noodles? Fried prawns? How about some horsemeat sashimi? All these foods and more are now available as frozen dishes from vending machines set up by restaurants across Japan. And the business model has picked up steam as a way to sell their most popular dishes 24/7, even amid coronavirus restrictions.

In some cases, the “Dohiemon” frozen food vending machine has been the savior of eateries hit hard by the pandemic.

One Dohiemon machine can be found in front of Yamanote Toragen, a restaurant in Toyota, Aichi Prefecture, that was granted “Michelin Plate” status in the “Michelin Guide Aichi, Gifu and Mie 2019.” Toragen is so popular that customers spanning every generation line up to eat there, perhaps especially its signature Dan Dan noodles.

The machine, with a piece of paper reading “This is not a food ticket vending machine” taped to the front, sells eight frozen items, including the Dan Dan noodles for 800 yen (about $7.40), and two bags of mapo tofu for 1,000 yen (about $9.20). When this Mainichi Shimbun reporter visited, a 54-year-old man was buying the Dan Dan noodles to bring home. He told the Mainichi, “As this place is so popular that customers often queue, I’d like to try it if I can recreate the same taste at home.” 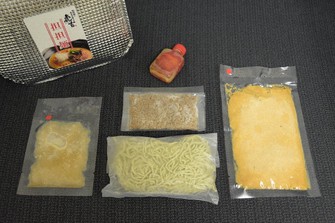 This May 10, 2021 photo shows the contents of the Dan Dan noodles sold through the Dohiemon vending machine at Yamanote Toragen. (Mainichi/Shiho Sakai)

Dohiemon was developed by Sanden Retail Systems Corp., based in Tokyo’s Sumida Ward, which had been making vending machines primarily for ice cream. Freezer vending machine manufacturers have built their products to a standard, so that containers of fixed sizes could fit into them. However, after hearing from a restaurateur who wanted to sell dishes in front of their establishment, Sanden set out to develop a frozen food vending machine that could accommodate products of varying size, and so the Dohiemon was born.

A company representative revealed that the idea had never occurred to them before. The new vending machine could be said to have been the product of adversity, namely the COVID-19 pandemic.

A Dohiemon was first installed at a ramen parlor in Tokyo this past February, followed by other regions such as western Japan’s Kansai and Kyushu in the southwest. In Saga Prefecture, an eatery specializing in deep-fried prawns with a bouncy texture is selling its fare through the Dohiemon machine, and a business specialized in horsemeat sashimi in Nagano Prefecture became a local hot topic when it introduced the vending machine.

According to Sanden, the company has received an influx of orders from across Japan, and plans to deliver more than 1,000 of the machines in fiscal 2021, ending in March next year. Apparently many restaurants selling their foods online are looking to open another sales channel with the machines, as demand for frozen food is rising amid the pandemic.

Toragen introduced the Dohiemon in mid-April, when its daily sales were down about 15% due to the virus. Since then the machine has sold as many as 200 meals a day. As sesame sauce in the Dan Dan noodles dissolves and its taste deteriorates if overheated, Toragen has separated the sesame sauce package from soup so that customers do not boil the sauce. It has also created a recipe video that customers can access with a QR code.

“I am really surprised by its popularity,” said Toshiya Suzuki, president of Toragen’s operator Seven’s Heart. “Though we had been selling the same items at our restaurants, probably the convenience of being able to casually buy them (through the vending machine) even outside business hours or on regular holidays played a huge role.” As Toyota Motor Corp.’s head office factory is nearby, Toragen’s vending machine fare is apparently selling well even late at night or early in the morning, perhaps thanks to workers on night shifts at the plant.

Suzuki said that he plans to enhance the menu for Dohiemon sales and is considering installing the machine at other locations. “We’re adapting to the new era using the coronavirus as an opportunity. Selling items through vending machines is one of the ways we’ve done that,” he said.